20 years ago we met in a hostel in Brugge, Belgium. We were both backpacking solo after college and our paths randomly crossed. I was traveling from the USA and Bell was touring the continent from Australia. We were both heading to Amsterdam with a single overlapping day. Little did we know that several years later, we’d be living in Amsterdam, along with a host of other cities, married to each other. It’s been a wild ride of couples travel, adventures and living abroad.

Over the past twenty years, we’ve lived together in Australia, Ireland, the Netherlands and the USA. We’ve visited over 60 countries on travels for both leisure and work, spanning Asia to the Caribbean. We’ve also spent significant time in countries like Greece, Sweden, Germany and Croatia thanks to multiple visits.

Since it’s been 20 years since we first met backpacking, we wanted to share an array of thoughts from tips on living abroad to travel highlights. Travel has transformed over the past 20 years, but some things remain constant!

In hostels 20 years ago the only thing you’d typically see a backpacker buried in was a book! If you were traveling in winter, many an evening was spent sitting around a pub table or in the hostel kitchen drinking cheap wine and beers and bullshitting with your fellow travelers. You didn’t even need to Google the best hostel in Paris because someone would tell you as you sat around and chatted into the wee hours of the night.

Since then, we have sporadically spent some nights staying in a private room in a hostel, like in Salento, Colombia, for nostalgic reasons. We’re often surprised to see other guests buried in screens rather than chatting to fellow travelers. These days we typically prefer to travel more comfortably, but we enjoy being able to give advice to travelers of all budgets.

For solo travelers, sociable experiences can still be found in travel. But now many solo travelers use social media outlets like Instagram, Twitter, SnapChat, Tik Tok, Tinder and Facebook to connect with fellow travelers. But it depends where you’re staying and the location you’re visiting, some places are still more sociable than others. It’s still possible for strangers to connect the old fashioned way- by first meeting in person.

Travel has evolved throughout history and that will continue. An important part of travel should always be talking to locals. But these days, people often spend too much of their vacation sharing photos on social media, rather than enjoying the moment, learning about the destination, and talking to people that live there. This is one of the reasons we try not to spend too much time on social media during our trips. Too much time plugged in can disconnect travelers from the destination.

One of the biggest changes to travel has been thanks to technology. Twenty years ago smart phones with GPS did not exist. That meant, it was much easier to “get lost in Venice” or anywhere compared to today. Technological advancements have made traveling much easier.

Internet Cafes were a big thing 20 twenty years. Cafes with desk top computers where you could purchase increments of internet time were ubiquitous. They were a life saver for keeping in touch with home and getting out of the cold in winter. Large chains of internet cafes dotted big European cities. Thanks to Wifi and portable devices internet cafes are largely obsolete now.

There are a lot of ways to live abroad. One of them is through a working holiday visa. Depending on the country, younger adults 30 or 35 and younger, can live abroad for 1 or 2 years with limited working rights. Sometimes restrictions include not being able to stay at a job longer than 3 months.

I organized a working holiday visa to move to Melbourne, Australia for a year. I highly recommend this visa to younger adults seeking to experience more of the world through longer travel. These visas are often advantageous for businesses looking for part-time and seasonal help.

Spousal and fiance visas can also be an option. Bell and I got married in Melbourne in 2005. Afterwards, we filled out paperwork and had an in-person interview with an immigration officer at the United States consulate in Sydney, Australia. Shortly after her US spousal visa was approved, and my Australian working holiday visa was about to expire, we moved to the USA together. Being young we had time to do the paperwork ourselves, but it may be advisable to consider hiring an immigration advisor if you get married abroad.

Many people choose to live abroad through student, work or even digital nomad visas (a new option in certain countries). There are advantages to being an international student, but a disadvantage can be higher tuition costs. Though there can be generous scholarships and stipends for masters students in Scandinavian countries and beyond. Study abroad programs vary in cost so students will typically pay a lot more in places like Australia or Western Europe compared to Eastern Europe or South America.

Various work visas are also an option. Research the countries you’re interested to live in to see what type of options are available. Countries like Greece, Portugal, Czechia (previously Czech Republic), Georgia and more offer digital nomad visas that offer flexibility for living and working abroad. They can even offer pathways to new citizenships for those that are interested!

Technology has offered improvements to public transportation in many destinations. Albeit, in some places in the USA public transportation shifted to a car culture decades ago. Our current home of Tarpon Springs, Florida is one example where the Railroad Station, which once served as the heartbeat of town, is now a museum.

But in many destinations throughout the world – technology has given rise to better and more efficient public transportation. When we first moved to Amsterdam in 2008, paper strips of tickets (called Strippen cards) were used for traveling through zones. Those were replaced over a decade ago with digital OV chip cards. New metro and tram lines have updated infrastructure from Athens to Amsterdam.

A Few Favorite Destinations and Trips

Spanning 1,771 miles (2,857 km), the Danube River flows from southern Germany’s Black Forest and empties into the Black Sea. It’s the second longest river in Europe after the Volga River in Russia. An abundance of beautiful destinations and natural beauty abound along this majestic waterway. It’s the perfect trip for couples travel that also offers fun ways to meet others during the journey.

In September, 2021, shortly after Europe reopened to more leisure travel following the height of the COVID-19 pandemic, we took Emerald Cruises Danube Delights 8-day river cruise. We explored 8 beautiful destinations without packing and unpacking our bags, and worrying about travel logistics. A modern floating hotel with panoramic windows in bedrooms, along with comfortable public spaces, offers multiple vantage points of incredible sites.

Our 8-day Danube River Cruise began in Nuremberg, Germany and culminated in Budapest, Hungary. The itinerary also included the German towns of Regensburg and Passau, Austrian towns of Melk, Durnstein and Vienna, and Bratislava, Slovakia.

Dramatic fjords and glaciers await visitors in Southeast Alaska. It’s the stage for some of the most dramatically beautiful landscapes on Earth. We started our journey by flying into the picturesque capital of Alaskan capital of Juneau and exploring scenic Mendenhall Glacier. We then embarked on a week-long small ship adventure cruise culminating in Ketchikan with UnCruise Adventures. This is a great destination for outdoors couples travel.

One of the many highlights was viewing the Northern Lights on multiple nights. It’s especially cozy and comfortable to view this natural wonder from the deck of a small ship, with a drink in hand! The dancing lights of the aurora borealis should be on travelers bucket lists to see at least once.

Bell even took a polar plunge in freezing water, with South Sawyer Glacier in the background. Afterwards, she enjoyed a well deserved drink in the outdoor hot tub. I was happy to snap the scenery, while eating fresh baked chocolate chip cookies and coffee.

Southeast Alaska is a wonderland to experience through kayaking, hiking, bushwhacking and small ship skiff boat tours. Here is what you can expect to experience on a 7-day Alaska UnCruise, along with packing tips and advice for staying in Juneau and Ketchikan!

Tanzania is one of the most popular destinations in Africa. Home to Serengeti National Park, along with a host of other amazing national parks like Ngorongoro Conservation Area, it is one of the best countries in Africa for a safari. Mount Kilimanjaro is Africa’s tallest mountain, making it popular with climbers. And Zanzibar (aka “Spice Island”) is a fantastic vacation destination offering white sand beaches, adventure, and culture galore.

Most travelers embark on safari during a trip to Tanzania. We took a 4 day safari with Caracal Safaris, which was enough time to see a huge variety of wildlife, while also experiencing the local culture. Here are some tips for a safari in Tanzania.

The people often make the place, and the Maasai are a unique tribe to mingle among. We stayed at an incredible Maasai Lodge, which combines a fantastic cultural experience with modern comforts. Traditional Masaai dancing, singing, nature walks and delicious food are highlights of a visit. You can even relax at the on-site infinity pool and hit the sauna!

Zanzibar was previously colonized by the Portuguese, Arabs and English and tragically was the center of the East African slave trade in the 1800’s. While the predominant religion is Islam, large Hindu and Christian minorities also reside on the island. Impressive architecture reflects Arab, Indian and African influences. Highlights of our time there included a spice farm tour, viewing native red colobus monkeys in Jozani National Forest and sweeping views of the Indian Ocean from our rooms. Read our article on how to spend one week in Zanzibar.

The above trips are just a few of our many couples travel highlights. Feel free to browse this website for additional tips and inspiration. If you have a question or comment on living abroad or need help planning a great trip, please leave a comment below or email alex(at)wanderlustmarriage(dot)com!

The past 20 years has been an incredible journey. But international relationships, like any relationship, requires compromise. Every relationship presents challenges to overcome over the course of many years. We’re proud to still be going strong, and look forward to what the next chapters brings for ourselves, family, friends and the planet!

Vacationing in the Caribbean 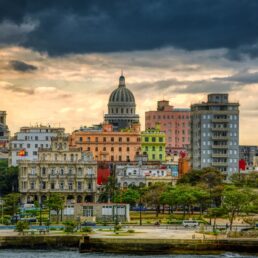 How to Prepare for your Cuba Holiday

2 thoughts on “20 Years of Couples Travel and Life Abroad”