Paris is one of the world’s most iconic cities. An illuminated Eiffel Tower dazzles the night sky, punctuating the French capital’s treasure trove of highlights. There is perhaps no better way to experience the highlights of Paris in a short time than exploring by bike. This past March, right before Covid-19 paralyzed the world, I had the opportunity to take the Paris Night Bike Tour with Fat Tire Tours. Here is what you can expect to experience on one of the best tours I have ever taken! 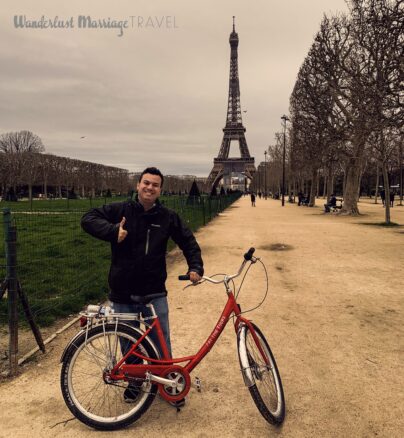 Cycling around storied landmarks and neighborhoods of Paris, like the Eiffel Tower, Louvre, Notre Dame Cathedral, Latin Quarter and Place de la Concorde is a huge thrill. It is also a fantastic and fun way to learn some history of the city, while getting orientated with the city. Plan to take the Paris Night Bike Tour early in your visit. The tour meets at the Dupleix metro station on line 6. After a little introduction, you duck over to the company’s nearby office to pick up your bicycles for the evening.

Tour guests also have the option to grab a bicycle helmet from a wide selection on the rack. I visited Paris in the early stages of the coronavirus pandemic, shortly before travel restrictions kicked in. So we were a small group of 5 during the tour, including our guide Jack. Jack, a jovial and knowledgable Scotsman is a phenomenal guide. He shared so many interesting and funny stories and historical anecdotes with our group. 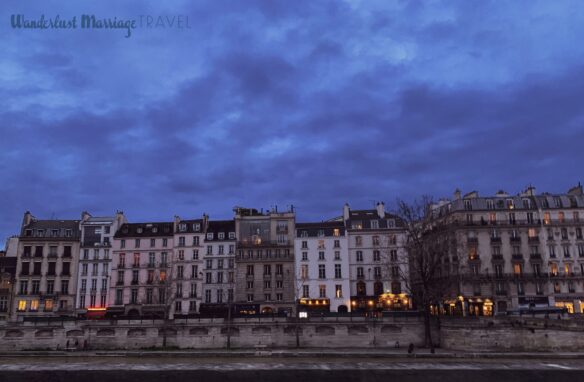 At Ecoile Militaire we were regaled with stories of Louis XV, the Sun King. He is credited as the founder of Ecoile Militaire, but it was actually his chief mistress, Madame de Pompadour, who funded much of its construction. Louis XV had a voracious sexual appetite and had hundreds of concubines. Another interesting note that Jack pointed out is a section of Ecoile Militaire is still filled with bullet holes from World War II.

When the Eiffel Tower was completed in 1889 for the World’s Fair, many residents of Paris not only believed it was an eyesore, they also worried that the world’s tallest structure at the time might fall on their homes! Gustave Eiffel financed the Eiffel Tower’s construction with the equivalent of 30 million euros of his own money – a fortune for the time and a huge risk. Incredibly, there were zero fatalities during construction. He made his money back in 6 months as the Eiffel Tower was instantly a successful tourist draw. Today, Paris’s hallmark attraction dazzles the night sky, with a sparkling light show on the hour. It is wonderful to bike past the Eiffel Tower both during daylight and then again at night! 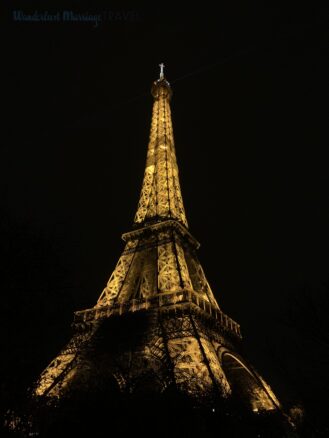 The Eiffel Tower is truly a world’s treasure to check out. I also took Fat Tire Tours Skip the Line Eiffel Tower Tour. It includes guided skip the line access to the second level, as well as access to the 1st, 2nd and summit levels of the Eiffel Tower. While that is also a great tour, I thought the Paris Night Bike Tour is one of the best tours I have ever taken.

Construction of Notre Dame Cathedral began in 1163 and it was not completed until 1345. Nearly 200 years of labor and 700 years of history makes it one of the most significant landmarks in Paris. Tragically, much of it was destroyed by fire on April 15th, 2019. But it’s being reconstructed and the French government hopes to have the work completed by the 2024 Paris Summer Olympics. For the time being, it’s closed to visitors.

Jack told us an interesting story about Napoleon’s coronation-like ceremony at Notre Dame Cathedral. The pope was meant to crown Napoleon, but Napoleon felt that act would make it seem like the Pope was more significant than him. To Napoleon, nobody was more significant than himself. So just before the Pope crowned him, he pushed the pontiff to the ground. He then grabbed the crown and anointed himself the Emperor of France.

Les Invalides is a complex of museums and monuments relating to the military history of France. Louis XIV ordered the construction of the complex in 1670. The building’s original purpose was a hospital and retirement home for war veterans. One of the highlights of visiting is the tomb of Napoleon. Napoleon was entombed under the golden dome of Les Invalides in 1840.

You do not go inside Les Invalides on the Paris Night Bike Tour. But you hear interesting stories outside, as you hop off your bike. Fun fact: Did you know Napoleon was buried without his penis? His penis was cut off during his autopsy, and a select group of people witnessed it. Napoleon was not very nice to his doctor, so he gathered the group and cut Napoleon’s penis off in front of them. He then gave it to a priest who smuggled it to Corsica. It eventually ended up on display in New York City in 1927. Who said history is boring!?

Outside the Paris Night Bike Tour, it is well worth visiting Napoleon’s Mausoleum. The large casket, under the golden dome, encircled by columns and statues, is the most impressive and grand burial place I’ve ever seen. I spent awhile there marveling at the grandness and contemplating the larger than life existence of Napoleon.

Les Bistro des Augustins is a great place to eat in the French Quarter. Portions are large, well priced and delicious. It is a wonderful place to dine for a casual lunch or dinner. Many feel their Gratin Landais (cheesy potatoes) are the best in Paris. Time permitting, head back to the Latin Quarter and eat there.

The Louvre is the world’s largest art museum. It was formerly the primary residence of the French Monarchy before the Palace of Versailles was built in 1682 under Louis XIV. Around 38,000 objects are exhibited over an area of 72,735 square meters (782,910 square feet). The art, sculptures and artifacts date from prehistory to the 21st century. The Louvre received 9.6 million visitors in 2019, making it the most visited art museum in the world.

The Paris Night Bike Tour does not include admission into the Louvre. But it’s a huge thrill to cycle through the exterior corridors. There is also an opportunity to take photos in front of the famous pyramid designed by architect I.M Pei. And of course, many more stories of a lavish French monarchy that barely ever stayed in the former palace, but kept possession of it prior to the French Revolution.

Cycling to beautiful Place De La Concorde at night is magnificent. During the French Revolution, thousands of people were beheaded in this now opulent square, including the infamous last Queen of France, Marie Antoinette. The smell emanating from the square was so bad during that time, that even cattle wouldn’t go near it. It was Napoleon’s idea to give this area a facelift and rebrand, hence Place de la Concorde.

The 23 meter tall Luxor obelisk in the center of the square is 3,000 years old. It was stolen from the Luxor Temple in Egypt by the French, and it took the Parisians awhile to figure out what to do with the large obelisk when it arrived in Paris. The left obelisk remains at the entrance to the Luxor Temple today.

Canal Boat Tour along the Seine

Part of this tour also includes viewing Paris by boat on a 1 hour river cruise down the Seine. It is amazing to see the Eiffel Tower lit up and sparkle at night, along with other highlights of Paris along the river. Jack popped open a couple of bottles of red wine and our small group of new friends shared travel tales while admiring and learning more about the city.

Did you know that there is the Statue of Liberty Paris? You get a great look at it on the 1-hour river cruise, as you sail right past it twice! It is much smaller than the Statue of Liberty in New York, which was a gift from the French. And given the French helped the US gain independence from the British, we share a lot in common. So it is fitting both countries have the same statue. 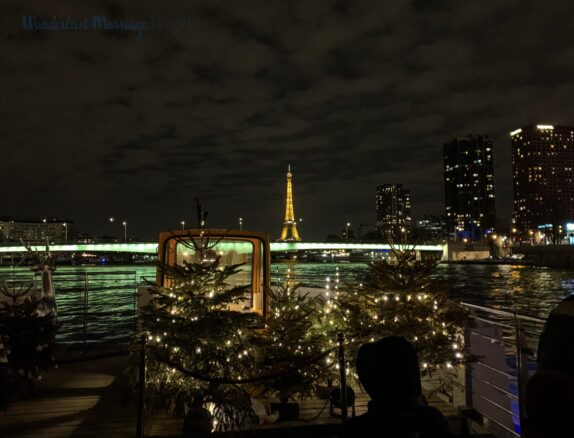 The Paris Night Bike tour costs just €44 ($51.60 USD) per person. It’s one of the best value tours I’ve been on, and it’s an amazing way to experience and learn about many of the highlights of Paris. The price includes:

It is a lot of fun bicycling around Paris! And there were even more stops than what I mentioned above. So many great stories of Napoleon, the monarchy and the French Revolution at sites around town ranging from Ecoile Militaire (the military school) to Saint-Germain-des-Prés, the oldest church in Paris, dating to the 6th century and Hotel des Invalides (Military Museum). You can book the Paris Night Bike Tour there.

Fat Tire Tours Around the World

Fat Tire Tours was founded in 1999 in Paris by American David Mebane. Their first tour was a 3-hour bicycle tour around Paris. Today the company offers daily bicycle, Segway, walking and skip-the-line tours in popular cities around the world. Other cities that you can take a Fat Tire Bike Tour include Berlin, London, Barcelona, Rome, Munich, New Orleans, Washington, D.C., Chicago, Milan, Florence, and San Francisco.

Hotel de la Bretonnerie is a charming, historic, centrally located and well priced place to stay. It is a lovely 29 room boutique hotel in the Marais district of Paris. The 18th-century mansion oozes a cozy ambiance between its well-appointed rooms and breakfast served in their lovely wine cellar. An elevator means guests do not have to carry luggage up flights of stairs either.

Step outside the hotel to a lively neighborhood packed with great bistros, bars, shops and patisseries. It is right around the corner from Hotel de Ville, which has been the headquarters of the Paris municipality since 1357! It is also a short walk to iconic Paris attractions like Notre Dame Cathedral, the Picasso Museum and the George Pompidou Centre. You can jump on the metro at Hotel de Ville to quickly reach other highlights like the Louvre, Eiffel Tower and Sacre-Coeur. Check out this review of Hotel de la Bretonnerie in my previous article. 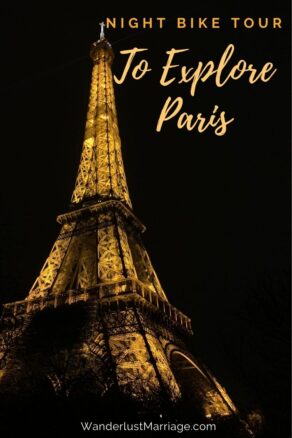 Disclosure: I was hosted on this tour by Fat Tire Tours Paris. But all photos and opinions here are mine. If I was not thoroughly impressed with the tour, I would not have dedicated this article to it. 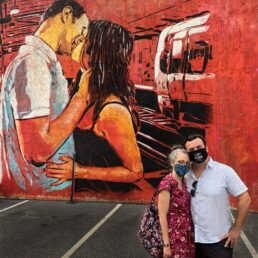 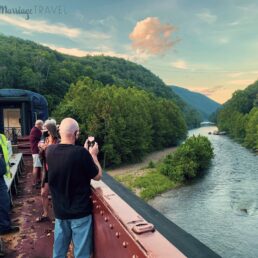